Yachad student Bea Mandelstam writes for The Jewish News about what British Jews can learn from minorities in Israel.

When we talk about the relationship between diaspora Jews and Israel we almost always refer to the strong link between Jewish people around the globe and the world’s only Jewish state.

With the rising threats to our community  and other minorities in recent years as well as our community’s growing fears for its safety, we can look at minority groups in Israel for hope and inspiration.

I met such groups last September, during the Yachad Student Trip to Israel and the West Bank. The trip was an incredible opportunity to meet and learn from inspiring and passionate Israelis – Jews and non-Jews – and Palestinians who are campaigning for peace and equality in the region. One meeting that particularly stood out for me was with Sally Abed from Omdim B’Yachad (Standing Together), a joint Arab-Jewish grassroots, progressive movement which mobilises people in support of peace, equality and justice in Israel.

Omdim B’Yachad work on numerous and diverse projects such as helping Palestinian farmers harvest their olive groves in the Northern West Bank and protesting the deportation of asylum seekers. They organise Israeli society to address a multitude of issues, campaigning for the end to the ongoing military occupation, whilst also addressing Palestinian citizens of Israel, Mizrachi, women’s, LGBT+ and other minority rights.

Omdim B’Yachad tackle issues that we as a Jewish community have often neglected and shied away from. Certainly, throughout my time at a Jewish secondary school, these issues and the ongoing military occupation were never even mentioned.

Sally, one of the leaders of the movement and a Palestinian citizen of Israel, shared her insight into the impact and power of their collaborative approach. Rather than sweeping these issues under the rug, Omdim B’Yachad tackles them face on. Engaging people from across Israeli society, raising awareness and demanding that the government address them. What struck me was how the success of this movement seemed rooted in the diverse range of people it engaged, proving that true progress comes when all minority groups are given a voice and all inequalities are addressed. 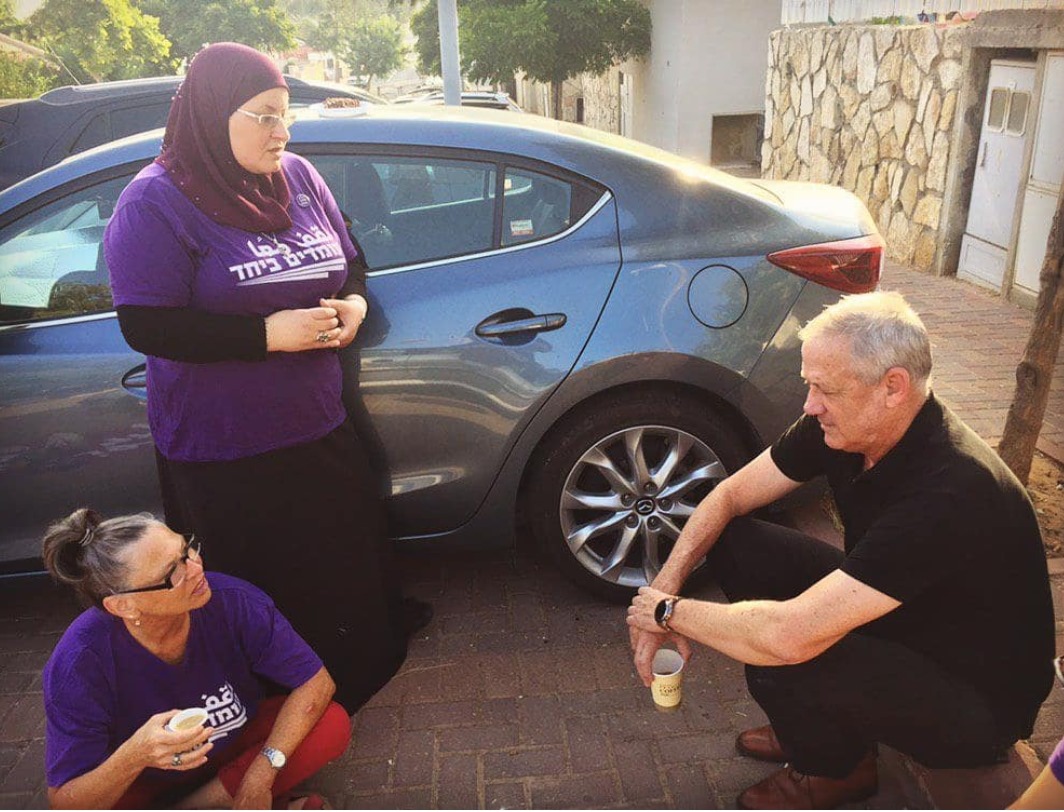 Sanding Together activists talking to leader of Blue and White party, Benny Gantz, outside his home, about ensuring his government will include Arab-Israelis (Standing Together facebook page/Yachad/Jewish News)

Hearing about Omdim B’Yachad left me feeling slightly more hopeful, knowing that people in Israel – Jews and Arabs, Israelis and Palestinians – are positively engaging and actively supporting each other, refusing to be enemies or accept the ‘us’ vs ‘them’ approach. As part of a minority group in Britain, I know how easy it can be to turn minority groups against each other. Standing Together offers a way to overcome that.

The power of collaboration, empowering communities and providing a platform for minorities is a sentiment that feels lacking in the current political climate back at home. With the general election fast approaching, and an increasingly hostile environment for many minority groups, we as British Jews will be making important and difficult decisions. What we can learn from minorities in Israel is that fighting for equality and protection of minorities is more impactful when we fight together, with other minority groups. When we stand together, we are stronger.

Omdim B’Yachad is fighting for an Israel which is true to the democratic principles upon which it was founded, and that we too should be fighting for. What could we learn from this Israeli movement about our political and social responsibility here in the UK? I’m delighted that the pro-peace group Yachad will host Sally Abed and Alon-Lee Green of Standing Together in the UK next week. I encourage every British Jew that is looking for a way to overcome the threats facing our community in the UK to attend the event in Central London on the 14th of November.

ABOUT THE AUTHOR
Bea Mandelstam is a master’s student at the Royal College of Art, is a member of Muswell Hill Synagogue and participated in the Yachad Student Trip last September.

This piece was originally published in The Jewish News.
This site uses cookies: Find out more.